The Wellbeing Assessment began with the identification of a conceptual model—the Engine Model of Well-being (Jayawickreme, Forgeard, and Seligman, 2012)— which we adapted to our project.

We then identified wellbeing dimensions that:

We reviewed existing measures for those dimensions to identify key content areas for each dimension’s outputs. At the same time, we developed a list of pathway items using applied behavior change theories (e.g., TTM and MI). During this process, we relied on input from our own expert panel of programming staff and researchers to reduce our item lists and check them for content validity. 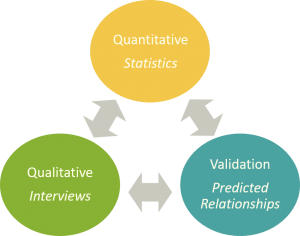 Once an initial list of items was drafted, we began submitting the measure to iterative rounds of student cognitive interviews, pilot administrations, structural equation modeling, and further expert input.

Thus far, the measure to has undergone four rounds of cognitive interviews and five rounds of pilot administrations with an undergraduate population. The fourth round of cognitive interviewing and second national pilot administration was completed in May of 2018.  That second national sample included more than 6000 students from 16 schools across the country. A freshman version of the measure was also piloted in August 2018. The results from these studies are currently being analyzed. We have posted preliminary findings based on the 2018 pilot.

Further details about the measure’s development and our approach to assessing its reliability and validity can be found in this paper, presented at the annual meeting of The National Council on Measurement in Education (NCME) in April 2017.