We examined the relationship between students’ overall sense of meaning in life, various types of extracurricular activities, and participation in at least one meaningful activity.

The sample included 6049 undergraduate students from 16 universities who participated in the 2018 Wellbeing Assessment survey administration.  Data were weighted using raking.

Results of a structural equation model (SEM) indicate that participation in at least one meaningful extracurricular activity is related to students’ overall sense of meaning in life (standardized coefficient = .33; Figure 1). 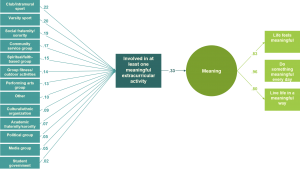 A second SEM included an examination of direct relationships between types of extracurricular activities and overall sense of meaning in life and found no evidence of a direct relationship (all structural coefficients ≤ .09; Figure 2). 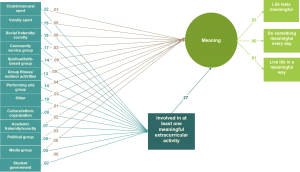 Together, these findings indicate that:

These findings have implications for student affairs professionals who plan and offer programming for undergraduate students.  Offering more programs to students is not necessarily better. It is more important to understand what makes activities and programs meaningful for students (e.g., students’ needs, interests, and values) and program accordingly.