Adaptation of the Engine Model

Wake Forest University’s Wellbeing Assessment was developed using the Engine Model of Well-being (Jayawickreme, Forgeard, & Seligman, 2012). According to the Engine Model, wellbeing attainment is dependent on the extent to which individuals have access to wellbeing pathways. Those pathways cover a wide range of content, and include both resources and conditions outside the individual (e.g., money, social support) and resources and conditions within the individual (e.g., values, beliefs, knowledge bases, emotional reactions, social and behavioral skills, and motivations). 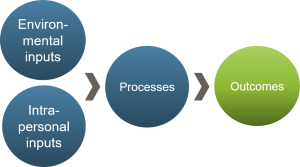 In this original formulation, the outcomes in the model were the overall wellbeing levels, namely affective wellbeing (i.e., levels of happiness) and life satisfaction. Important contributing factors to well-being were considered to be environmental inputs, intrapersonal inputs, or process. For example, the personality trait of optimism would be an example of an intrapersonal input while the ability to make and maintain a social support network would be a process.

Our application of the Engine Model of Well-being to the Wellbeing Assessment (Figure 2) included three major changes: (1) application of the Engine Model at the micro-level, (2) separating out current, university-specific environmental inputs from all possible environmental inputs, and (3) broadening the scope of the outcomes.

Applying the Engine Model at the micro-level meant that we applied the Engine Model to each dimension of wellbeing that we believe the university setting can and should support. Each of those dimensions is treated as having its own set of outcomes and pathways (i.e., inputs and processes). For example, in the Friendships dimension, the outcomes are the items that assess whether or not people have supportive friendship networks. We then also assess a variety of pathways such as confidence in friendship skills and motivation to build friendships.

Our final major adaptation was to expand the scope of the outcomes in the Engine Model. In its original formulation, the outcomes were indications of overall wellbeing. Having applied the Engine Model at the micro-level, outcomes in our adaptation are the extent to which students report wellbeing in each of the dimensions. Accordingly, we included summary indicators of wellbeing such as life satisfaction and mood among the associated variables in the far right of Figure 2. Recognizing that university programmers, staff, and stakeholders need to be aware of the connections between wellbeing and a number of associated variables, we included some of those associated variables in the Wellbeing Assessment: GPA, intent to transfer, services use, and academic engagement.

To measure general factors that contribute to wellbeing, the Wellbeing Assessment also includes some non-context-specific input items about topics such as demographics, housing, finances, and health.

Figure 3 depicts the full application of the Engine Model to multiple wellbeing dimensions along with general inputs and associated variables in a format accessible to both research and general audiences alike.

This model can be explained by stating that for each dimension of wellbeing in included in the Assessment, we have created two sets of items: (a) a set of outcome items that measure whether people have achieved wellbeing in that dimension, and (b) a set of pathway items that measure whether people have the skills, resources, and conditions necessary to achieve wellbeing in that dimension. The pathway items are the collapsed pressures, intrapersonal inputs, processes, and pressers from Figure 2.  On the far left of Figure 3, the model includes a set of items that measure general, non-context-specific pathways such as financial resources and health. Included in this set of items is the environmental inputs from Figure 2. On the far right of Figure 3, the model includes a number of associated constructs that include summary indicators of wellbeing such as life satisfaction and affective wellbeing, as well as a set of concrete outcomes that are important in university settings (i.e., GPA, intent to transfer, services use, and academic engagement).

To learn more about how we identified pathway items click here.